Spring '16 - The Hare Who Cried Ant (Remount For Childrens Hospitals) 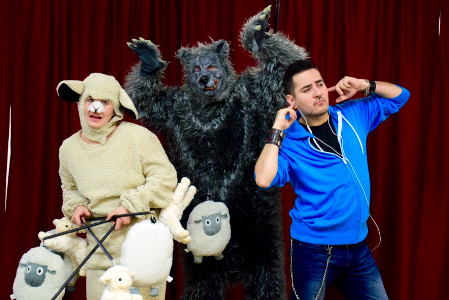 This remount production will be touring for the childrens hospitals in and aound Los Angeles! We'll be traveling to Millers Children's Hospital, Shriner's Hospitals for Children, CHOC, CHLA, and Loma Linda University Children's Hospital. We want to show the patients that The Actors Project hasn't forgotten about them! Along this tour we'll also be stopping by a few elementary schools!

Aesops's fables have been retold for many centries but they haven't been told like this! The Hare Who Cired Antbrings four of Aesop's stories to life: The Boy Who Cried Wolf, The Lion And The Mouse, The Tortoise And The Hare, and The Dove and The Ant. This imagintive tale teache students some of the many lessons that Aesop wrote about. In creative and humorous ways The Hare Who Cried Ant brings a lot of heart to the wonderful colorful characters Aesop has created.

The story begins in a forest where a race between the Hare and a Fox is in progress. The Hare finishes the race in first place and starts to brag about his win. Fox wonders if there's anyone who could win against the Hare. Enter the Tortoise to challange the Hare. All the animals laugh at the idea of a very slow Tortoise going up against the Hare. The Tortoise convinces the Hare to race against him. Low and behold the Tortoise is a very slow runner. As the race continues both the Hare and the Tortoise travel to different locations that establish the other stories, such as the Hills (The Boy Who Cried Wolf), the jungle (The Lion and The Mouse) and a river (The Dove and the Ant).